Animating in Spine is done by setting "keys". Keys define the start and end times and values of a transition. For any time between the keys, the value is interpolated. The art of animating a skeleton comes down to the poses defined by the keys and the times for the keys on the timeline.

Before keys can be set, be sure you are in animate mode and that you have an animation active by setting its visibility dot in the tree view, or by selecting it in the animations view. 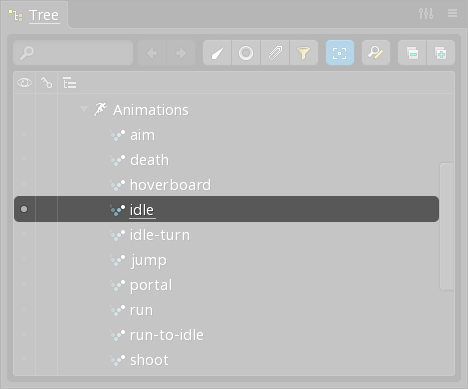 A new animation can be created by selecting the Animations node in the tree and clicking New... Animation. 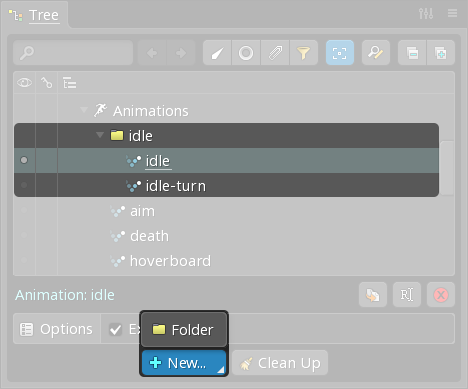 In animate mode, the skeleton's pose comes from the current timeline position and the animation's keys. The timeline is shown on the graph, dopesheet, timeline, and audio views.

If you can't find the key causing the orange vertical line at the end of the animation, likely it is a deform key for a skin attachment or a bone is hidden. Check Show all skin attachments in the tree settings or press ctrl+H (cmd+H on Mac) for Show All Bones/Slots.

Once keys are set they will appear below the timeline in the graph or dopesheet views. Orange diamonds on the timeline indicate which frames have at least one key. An orange vertical line marks the key with the highest frame, which determines the animation's duration.

Similar to panning in the viewport, dragging with the right mouse button pans the timeline left and right or up and down.

When repeat is enabled and the timeline is scrubbed past the last frame, the position will loop back to the first frame, but only if the scrubbing started before the last frame. This allows scrubbing to be used on a looping animation. If this behavior is not desired then either begin scrubbing after the last frame or disable repeat.

The timeline is divided into units of time called "frames". Frames make it easier to choose a discrete position in time and to set multiple keys at the exact same time. By default the timeline uses 30 frames per second, but this can be changed in the playback view.

Sometimes an animation looks good on every frame, but during playback the interpolation between frames is undesirable.

Frames exist only for convenience. During playback the timeline position moves between frames (unless interpolation is disabled). Playback can be done at a higher or lower frame rate than the timeline shows.

Hold shift when clicking or scrubbing the timeline to disable frame snapping and set the timeline position between frames. This allows you to see the animation interpolate smoothly, as it does when played, and to set keys between frames, if needed.

Fractional frames can also be used for a very short transition. For example, a bone could have a translate key on frame 15, then another key on frame 15.01.

When disabled, playback continues past the end of the animation.

Repeat is stored per animation, but it is not exported in JSON or binary data.

If there is a change to redo when the timeline position changed, then the pose cannot be recovered this way.

When auto key is not enabled and changes are made to a skeleton in animate mode, they are not automatically stored in the animation as keys. If the timeline position is changed, the unkeyed changes are lost. To keep the changes, they need to be keyed by clicking the key button for each property that was changed. Alternatively, the Key Edited hotkey can be used to key all changed properties by pressing K on your keyboard.

When Auto Key is enabled on the main toolbar, a key will be set automatically any time a change is made. This is very convenient and it is common to have auto key enabled all the time. However, care must be taken not to accidentally create unwanted keys.

Keying all the properties that already have keys results in keys that make up the current pose. This is very useful because those keys can then be moved to another frame to achieve the same pose there.

The following sections list all the properties that can be keyed in Spine and where to find the key buttons.

A key for rotation, translation, scale, or shear is set by clicking the key button next to the numeric input for the respective tool in the main toolbar.

Additionally, when a bone has any unkeyed changes for rotation, translation, scale, or shear then an orange key button appears next to the bone in the tree. Clicking this button creates a key for the unkeyed transform changes. 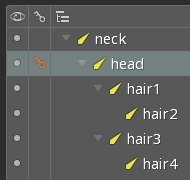 By default, each translate, scale, and shear key for a bone sets both X and Y. This is sufficient for many animations and reduces the number of timelines shown in the dopesheet and graph. It is also slightly more efficient, as there are fewer timelines that need to be applied at runtime.

For animations that need it, X and Y can be keyed separately by checking the Separate checkbox for a bone in the tree properties. Once separated, X and Y for the bone will show up separately in the graph and dopesheet for the current animation. 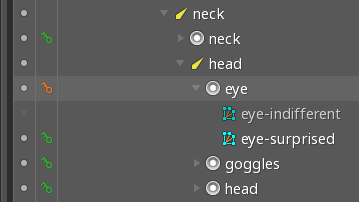 Frame-by-frame animation can be achieved by keying the slot attachment so a different image is shown every few frames. See the frame-by-frame demo or example projects for usage examples.

To key the slot color, click the key button next to color button in the tree. 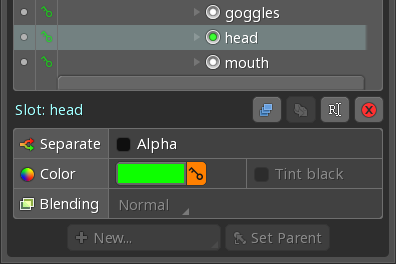 By default, each color key for a slot sets both color (RGB) and alpha (A). This is sufficient for many animations and reduces the number of timelines shown in the dopesheet and graph. It is also slightly more efficient, as there are fewer timelines that need to be applied at runtime.

For animations that need it, color and alpha can be keyed separately by checking the Separate checkbox for a slot in the tree properties.

Once separated, color (RGB) and alpha (A) timelines for the slot are shown separately in the graph and dopesheet for the current animation. Also, two color buttons appear for the slot color. The left button shows the color with alpha and allows the alpha to be keyed. The right button shows the opaque color and allows the color to be keyed. Clicking either button opens the same slot color dialog which can change either the alpha, color, or both.

The key button next to the Draw Order node in the tree will set a key for the current draw order. See draw order for more information.

The key buttons for setting event keys are next to each event in the tree. The event's integer, float, string, volume, and balance properties are keyed together. 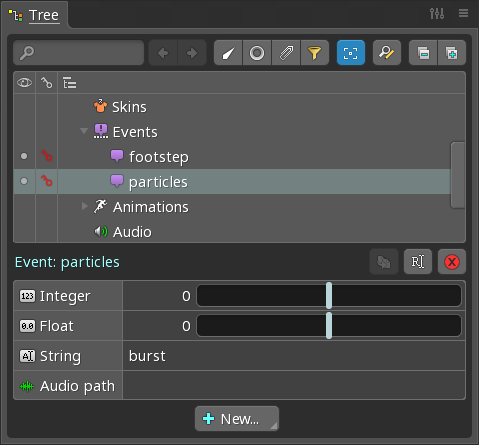 The event's properties can be changed before setting a key. This can reduce the number of events needed. For example, you could have a single particles event and use the string value of each key for the name of the particles to show at runtime.

Setting a deform key is known in Spine as "keying deformation". In other software it is sometimes called "free form deformation".

To set a deform key for the vertex positions of a mesh, path, bounding box, or clipping attachment, click the key button next to attachment in the tree. 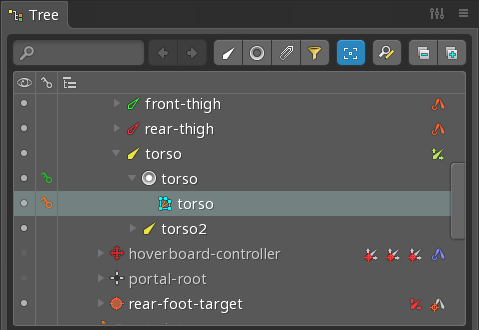 Generally weights should be preferred and deform keys used only sparingly for these reasons:

In animate mode, individual vertices that have been translated are shown in pink. Hold ctrl (cmd on Mac) and double click a vertex to select all the deformed or undeformed vertices. 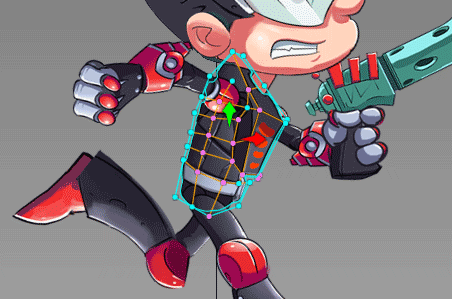 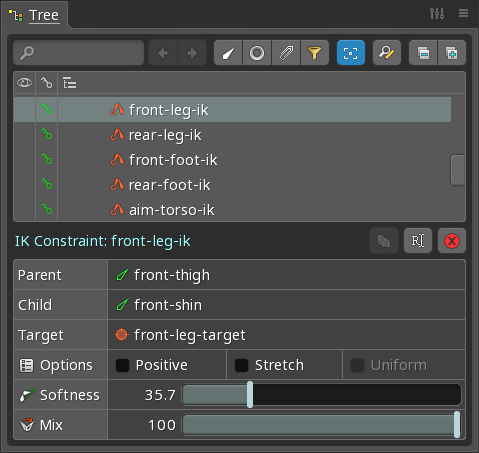 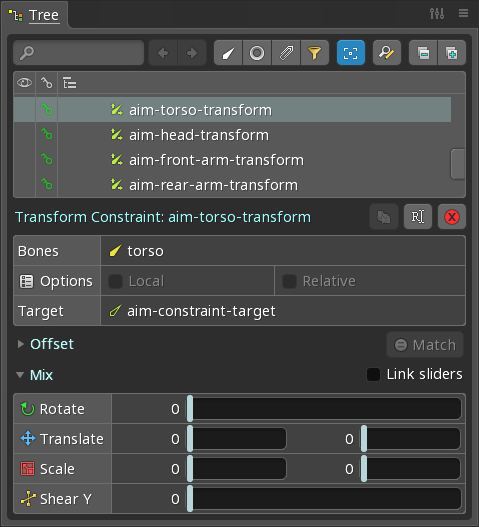 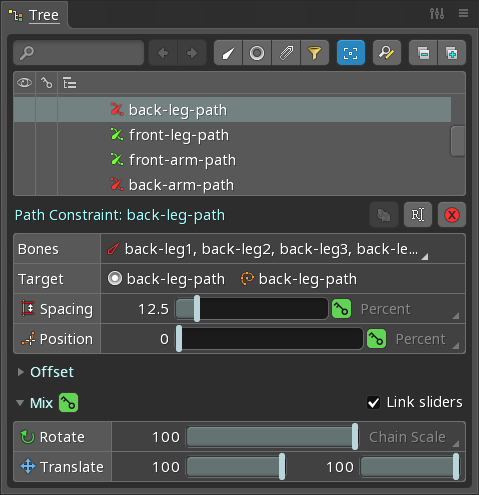 From left to right:

Bone transform, color, slot attachment, and deform keys can be pasted to a different bone, slot, or attachment by selecting it before pasting.

The Offset button is used to move keys for looping animations, wrapping the keys back to the start if they pass the end of the animation. This makes it easy to adjust follow through and overlapping action, which are important principles that make animations look natural.

Offset can also be activated by holding ctrl+alt (cmd+alt on Mac) while dragging keys in the dopesheet or graph.

To use Offset, the first and last keys must be the same. This is almost always already the case for looping animations.

Loop can be used to control the start and end frames used for Offset, otherwise frame 0 and the highest frame for the animation are used.

Multiple animations can be selected in the tree and Clean Up will process all of them at once.

The Clean Up button in the tree properties for an animation deletes all unnecessary keys. These are keys which can be safely deleted without affecting the poses in the animation. This includes keying the same value multiple times in a row, keying the same values as the setup pose, and many other scenarios.

In the future Spine will allow marking keys as "protected" so Clean Up will not remove them.

While Clean Up is usually safe to use, there may be some cases where it removes keys that are needed. The most common scenario is when an animation is intended to be applied on a higher AnimationState track. In that case, keys may be needed to override animations from lower tracks. There may be other, rare scenarios such as when AnimationState is not used at runtime or if runtime code is used to find a key and change its value.

Now is a great time to explore firsthand how keying works in Spine. If you haven't yet set up your own skeleton, you can open one of the example projects and create a new animation by clicking the Animations node in the tree, then New... Animation. In animate mode, pose the skeleton at frame 0 and set keys (for example, by pressing K or enabling auto key). Next, click frame 30, pose the skeleton differently, and set keys. Scrub the timeline by dragging or click play to see your animation in action.