Bounding boxes and a special announcement

We have released bounding boxes! This allows you to attach polygons to bones, then at runtime you can use the polygons to do hit detection, for physics simulation, etc. A bounding box is an attachment and goes in a slot, just like an image, so can be changed by animations or at runtime as needed. This can be useful when you have multiple items to equip which have a different bounding boxes. Also, a bounding box is translated, scaled, and rotated by the bone it is attached to. 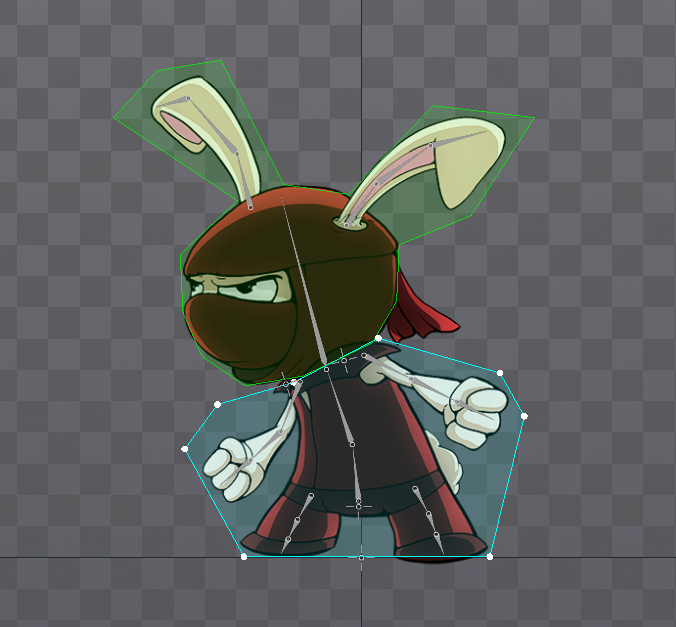 We’ve been focusing on editor features, so currently some of the runtimes are missing bounding boxes, keyable draw order, and events. We will change gears and bring the runtimes up to date very soon!

We’ve been doing some R&D and have a pretty exciting feature to announce: free form deformation! While we didn’t make the final Kickstarter goal, this is a very important feature and will enable Spine to handle many types of animation that would otherwise be difficult. Also, images can be deformed to cover problematic areas such as joints, which would otherwise require new images to fix. FFD reduces the amount of art needed even further.

We are very close to having all the Kickstarter goals and stretch goals complete. All of the major tasks are done, we just need a bit of time to clear out the smaller tasks, then we can all celebrate! We really appreciate everyone’s patience during the past 7 months while we’ve been working on Kickstarter goals. We are almost there!